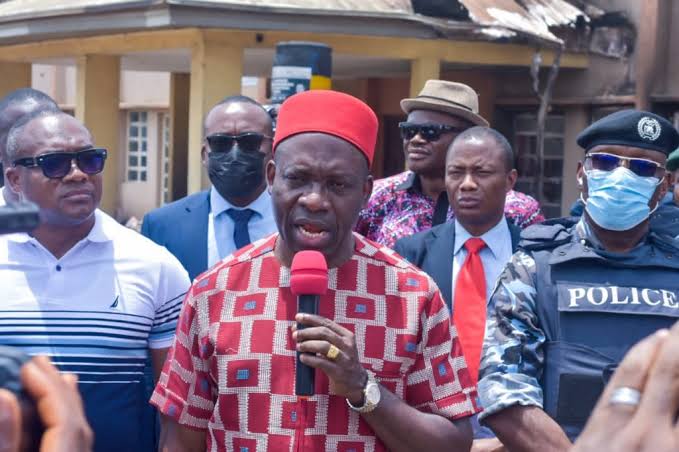 On the same day, it emerged that gunmen on Thursday evening invaded a cattle market in Igboukwu, Aguata Local Government Area, killing cows and goats in the market.

The Aguata local government secretariat was on Thursday razed by gunmen, including shops and vehicles parked in the premises.

But Soludo who inspected the burnt local government headquarters said the attack was only a reprisal by criminal elements, whose camps were on the same day stormed by security agencies, and most of them arrested.

Soludo said: “Yesterday (Thursday), security operatives smoked out some criminals camped at Ogboji and Aguluezechukwu, and the reprisal is the burning of Aguata Local Government Area Headquarters by some of the fleeing criminals.

“Part of the items found in these criminal hideouts is a register of kidnapped victims and the ransom paid. This is not who we are, never can we, under any guise, allow criminals the latitude to define who we are.

“Ndi Anambra are irrepressible. They are out to reclaim their land. To restore peace, and set the pace for the building of a liveable and prosperous homeland. I repeat, anyone in the bush with a gun is a criminal and would be fiercely resisted by the people.”

The governor spoke further that: “We have extended the olive branch to all genuine agitators, and made extensive calls for those in the bush to come out and shun criminality.

“How do you explain to any sane mind that responsible citizens have elected to pursue a supposed legitimate course adopting criminal strategies of kidnapping, arson and murder? This is despicable, not permissible and against any known law of humanity.”

He added that 85 per cent of those arrested are from a state in the South-east, while the remaining 15 per cent are from another state in the same zone, and that there was no Anambra indigene among them.

Meanwhile, gunmen on Thursday evening invaded a cattle market in Igboukwu in Aguata Local Government Area, killing cows and goats in the market.

THISDAY gathered that the gunmen headed to Igboukwu after they left Ekwulobia, the headquarters of Soludo’s local government council, Aguata, where they burnt down structures and vehicles.

Meanwhile, police in Anambra State have confirmed the incident, saying it happened on Thursday after the local government secretariat in Ekwulobia had also been set ablaze by unidentified gunmen.

Police Command’s Spokesperson, DSP Toochukwu Ikenga who spoke to our correspondent described it as cruelty to animals.

“What happened was that some elements while riding in motorbikes yesterday evening and shooting sporadically into the air got to the cattle market and while shooting, some cattle were shot too.

“We have extended our surveillance to that area and our men are already working. This is cruelty to animals and very condemnable. The cattle in question are also owned by people of the area,” Ikenga said.