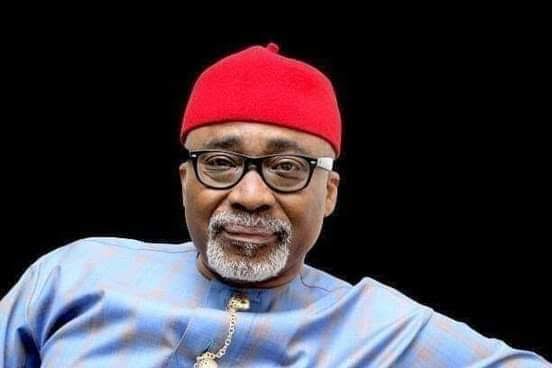 Senate minority leader, Enyinnaya Abaribe, and 10 other Abia State governorship aspirants, on Wednesday, rejected the list of delegates submitted to the national leadership of the party.

The aspirants, who took their protest to the national secretariat, noted that “at the centre of the vexed issues is the obvious manipulation by a tiny segment of the State Executive Committee of the party to yield to plots at subverting the democratic process, which is geared towards achieving a predetermined goal of imposition at all levels.”

“We are therefore here in our party’s Abuja National headquarters to alert the party and the Nigerian public of this ugly development, which if not stopped could spell doom for the party ahead of the 2023 general election not only in Abia State but in the South East as a whole,” Abaribe said on behalf of other candidates.
Abaribe said there was not and has never been any ward congress to elect the three-man ad-hoc delegates in the state.
He further alleged that the chairman of PDP in Abia State usurped the powers of PDP’s National Working Committee by single-handedly writing a letter to inform the INEC about the congress.

“It is preposterous that what is being bandied as a list emanated from an imaginary congress conducted vide a letter of notice to the Abia State Resident Electoral Commissioner signed by the Abia State Chairman of the PDP, Mr. Allwell Asiforo Okere. The implication being that the functions of NEC and NWC was performed by a State Chairman of the party and NOT the National Chairman and Secretary of PDP,” Abaribe stated.
The aspirants advised the Iyorchia Ayu-led National Working Committee to disregard the list adding that “INEC has come forward to clarify that it neither received any communication from the PDP National Chairman and the National Secretary to participate nor did it monitor such exercise.”
The Abia governorship aspirants argued that INEC was permitted to relate only with the national executives of political parties.
“Therefore communications for the purposes of congresses and convention must be through the National Chairman and the National Secretary.
“It will be imprudent for the NWC to be seen to have allowed its powers to be so usurped knowing the dire consequences of such action on the electoral process and the quest to enhance the fortunes of the party in the 2023 General elections.”