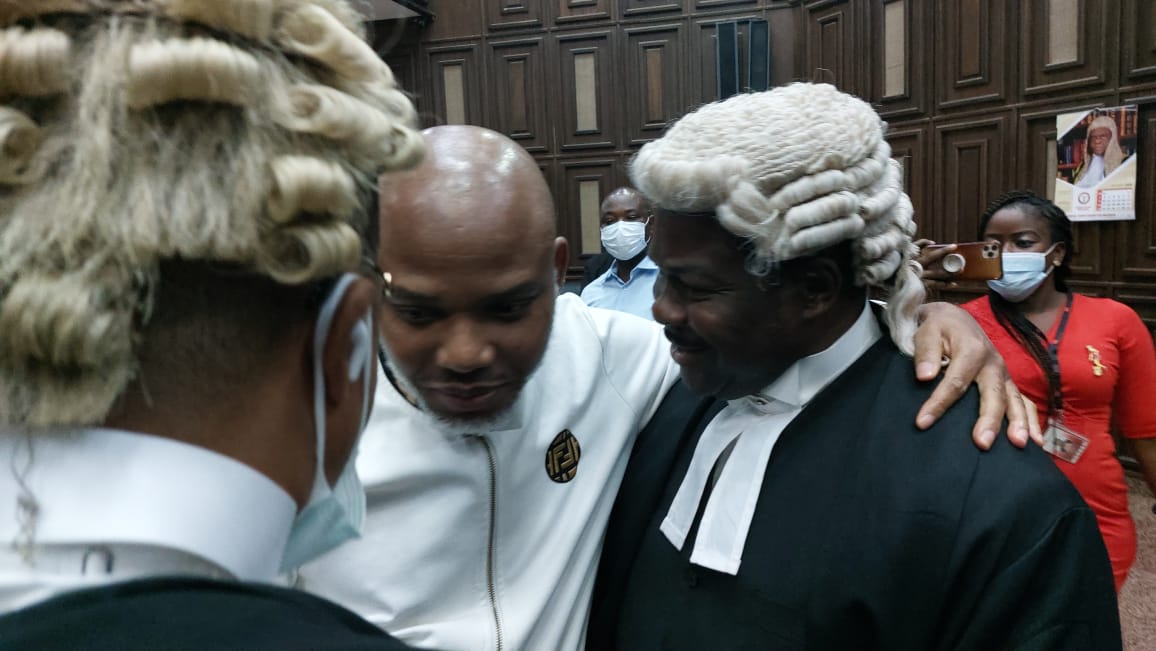 The Leader of the Indigenous People of Biafra (IPOB), Nnamdi Kanu has issued seven-point directives to his supporters as he awaits judgment from the Supreme Court to seal his fate.

The directives issued through Kanu’s lawyer, Ifeanyi Ejiofor, after his routine visit to him  first called on his supporters to be cautious of their enemies and maintain peace in all quarters adding that IPOB is a peaceful self-determination movement.

He went further to condemn all forms of criminalities and those behind them as a second point, while he stressed as a third point that he was not giving any order to any group to engage in any form of criminality.

The statement partly read, “Furthermore, Onyendu directed me to issue the foregoing statements:

“1. That this critical time calls for the greatest circumspect among his followers because the enemies are relentlessly exploiting the vulnerable, to sustain their status quo, and further blackmail the IPOB, ably led by Nnamdi Kanu, which is a peaceful self-determination movement.

“2. He has a hard stance in the condemnation of crimes and dissidents and reiterated that he has never condoned nor supported criminality of any form. Hence, the criminal elements who are involved in making lives unbearable to our people should be immediately fished out and dealt with as such. They have no place in IPOB’s peaceful self-determination movement.

“3. That the general public and indeed his people should be notified in unmistaken terms that nobody is receiving any instruction from him for the purpose of encouraging dissidents’ behaviours and accordingly, disassociates himself from any person(s) who is mischievously feeding the public with such blatant falsehood. Kanu stressed that he has since made his stance public, which position is clearly contained in a viral short clip, recorded during one of his appearances in Court.”

The separatist agitator on the fourth point called for complete tranquillity in the Southeastern part of Nigeria which has witnessed all manners of disturbance and chaos, especially during Monday’s sit-at-home.

Kanu made the fifth point that IPOB was created on a peaceful foundation. He also said it was the activities of assailants that were forcing security agents to unleash terror on the South-East region.

“4. Kanu reiterated his call for total calmness in the entire South-East region and particularly queried the mental state of those who are relentlessly waging war against his people, the very people he had sworn to protect and make life better for.

“5. Kanu’s movement was founded on a peaceful bedrock, in consonance with the universally recognized rights of indigenous people to self-determination, as clearly encapsulated under the extant laws.

“6. That the activities of the dissidents/marauders who engage in criminal activities have further emboldened the Nigerian security agents, to unleash terror on innocent people of the South-East region,” the statement said.

Finally, Kanu said the court rulings in his favour might not go down well with the federal government, thus asking his supporters to be peaceful and calm to avoid being blackmailed.

The statement added, “7. In conclusion, Kanu reminds UmuChineke to note that the successive landmark victories he recently recorded in various Courts of competent jurisdictions against the Federal Government of Nigeria (FGN), may not have gone down well with his traducers, including the FGN. Hence, he insists that all hands must be on deck to enable saner minds to identify the real enemies in our midst, and those being used by the establishment to try to implicate and/or blackmail him.”

Speaking about the court case, it said, “From every indication, it is very likely that a date will soon be assigned at the Supreme Court of Nigeria for the hearing of Kanu’s Appeal against the Order staying the execution of his judgment. We will not hesitate to inform UmuChineke, through the approved channel once a date is given.”